AhnLab promises to contribute to our society as a 'company with soul’ in which all members of the organization share healthy values.
Celebrating AhnLab's 10th anniversary...

AhnLab suffered many challenges even before the establishment, but now proudly celebrates its 10 year anniversary. A company has a 5-year survival rate of 10% so the 10-year survival rate is merely 1%. Considering that the survival rate of a venture company is less than one-tenth of that of a general company, AhnLab has withstood the probability of less than 0.1%. I believe that the key to the survival and the development of AhnLab was due to not only the efforts of all of us, but also the help of others who were with us through the good and bad. I would like to take this opportunity to express my sincere thanks to all of you.

When I started thinking about my own business ten years ago, I thought a lot about the meaning of a business. Being a doctor and a programmer back then, I was comfortable in my own profession but was completely oblivious to the world of business and management. So, understanding the definition of a business was important to me as I am a person who works for a reason, a value that my heart calls for. The most basic function of a company is to be a location where involved members spend time and discover themselves. But this alone is not much different from being a freelancer. After arranging my thoughts, I came to a personal conclusion that the true meaning of working in a company or an organization is the ability to do valuable work together that cannot be accomplished individually.

However, I also questioned the universally acknowledged notion that the purpose of a company is to generate profit. But if we apply the backward reasoning, in order for a company to generate profit, it needs to create a product or service whose value can be recognized by its customers, and then sell it. Then, the key goal lies in the accomplishing a result, not profit. We witness problems in our society that arise from companies with the sole goal to generate profit regardless of the means. And perhaps the conflicts of human history are caused by the confusion of what should be the purpose and what should be the result. This is why I believe in the idea that a company’s profit is harvests from the results –in line with the wisdom to stay true and keep persistent for the result to follow.

I have strived to achieve three things at AhnLab for the last ten years. First, I wanted to create a working model for a software business that would succeed in Korea. In a situation where the value of knowledge and information is not recognized and the market structure is distorted, I wanted to leave a ray of hope for the next generation. Secondly, I wanted to prove that returning a profit with honest work is possible even in the current economic structure of Korea. I wanted to create an example to show that transparency and ethical management was more beneficial for the long run. Thirdly, I wanted to prove that public interest and profit-seeking are compatible, not incompatible. Perhaps all of you at AhnLab have been making great efforts in these three things together as a meaning of our existence.

As a CEO, the past decade felt like living a life as a constant rock-climber on a never-ending cliff. Looking down was dark and looking up was covered by the clouds and I could not tell how far I had come or whether there was a final destination. Despite the uncertainty, I was forced to be on an alert at all times as there were just no other options. During this strenuous process, I asked two questions to myself every day. "What is the key to our survival?" "Am I the right person for this organization?" Here, the second question can be divided into another two questions. "Do I have the ability to develop my company to the next step?" And, "Can I put a 120% effort?" This is how I spent the last ten years in a state of constant self-confirmation, like a cliff climber.

And now that we are celebrating the 10th anniversary of AhnLab, I would like to step down from my position as the CEO.

The COO, who has proven himself over the past years, will take over and I will start a new role with AhnLab as the Chairman of the Board. As contrary to the norm in Korea, I will not be involved in direct management and leave the authority and responsibility of AhnLab to the new CEO. And I would like to work for creating a better governance structure for all of our shareholders and steer our directions.

I have been making the preparations after I decided to step down early last year. Since early last year, I delegated more of AhnLab's operations to the Vice President and COO to focus on external activities necessary for this company. The biggest and the most meaning accomplishments of the last year which is first in the software industry in Korea is also the result of this successful division of roles. And I am delighted to be passing on the CEO position in confidence that AhnLab will be able to continue the record performance of this year.

In addition, I have written books to summarize my experiences and thoughts as a CEO. These books were especially written after I had finish something or there was a special reason, comprising of all the things I had learnt until that point in life. For example, I wrote 'A Strange Computer Doctor' based on the experience of creating a free antivirus program for 7 years before the foundation of AhnLab. I wrote 'A Fight of a Lifetime' based on my experiences from the foundation of AhnLab to the time just before being registered on KOSDAQ. And the recently published 'The Things We Need Now' was written as my pursuit to help our staff and younger generations by providing the stories of my difficulties and reduce the trial and errors in their lives.

Now, I will devote myself as the Chairman of the Board of Director and would like to start studying again for around two years. This is my biggest reason for stepping down–my yearning desire to learn. Before I get too old to read–which doesn’t leave me with a lot of time–I would like to treasure my last chance of being a student and return to the graduate school. I already feel like a student with books to read and exams to prepare for. 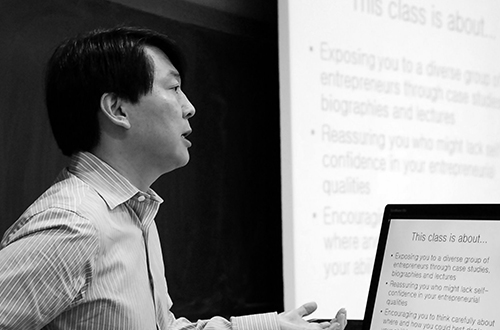